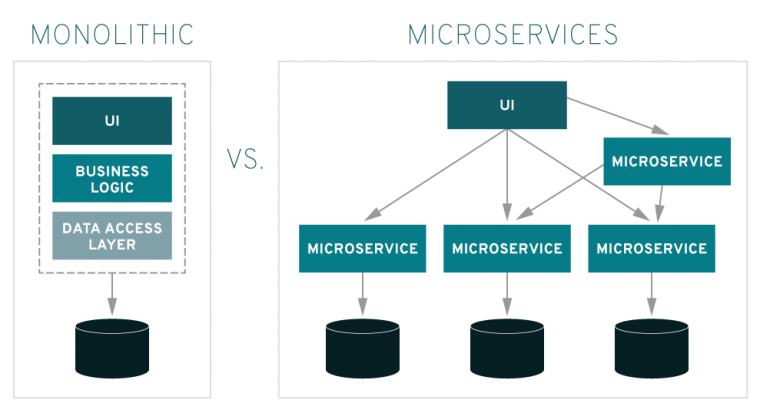 Two years ago, I wrote my yet most popular blog on microservices vs monolith The aim of the blog was to introduce my readers to the advantages of microservice architecture and how that compares to a monolith architecture. While there has been a lot of growth in adoption of microservices recently, there is still big knowledge gaps on how to design your architecture, decoupling already existing monolith application, deploying and monitoring of applications among others.

In this blog, I will guide you through some of the considerations you need to make before shifting to microservice architecture using some simple application that I developed using Nodejs and MongoDB.

The code is available on my Github repositorywhich you can clone follow through the blog and even modify to your liking.

There are three microservices and each has its own collection (database) and can operate independently. The microservices are based on subdomains around the concept on an e commerce platform.

Update the database connection by updating the variable DATABASE_URL on all the .env files in the app folders. You can use locally hosted mongodb or configure a free mongo atlas cluster for testing.

Interact with the api via postman/equivalent API testing tool

With this approach ensure that you have docker installed. Update the database connection by updating the variable DATABASE_URL on all the .env files in the app folders. You can use locally hosted mongodb or configure a free mongo atlas cluster for testing.

Create docker images for each microservice. Note the [.] at the end. It means create the container from the content in the current directory. Otherwise you can also provide relative or absolute path to the project folder.

Run the docker images. Note that the port numbers here are the ones that you have exposed in the Dockerfile. If you change either make sure they are the same including on the API endpoint

Interact with the API via postman/equivalent API testing tool A couple of docker commands you can use to interact with docker containers are;

Show the logs of the running container docker logs [container_id]

GET http://localhost:3000/api/users/ Get all the users

GET http://localhost:3001/api/products/ Get all products

GET http://localhost:3001/api/products/{id} Get a product with a given id

GET http://localhost:3002/api/orders Get all orders

Interact with the API as documented above and do not forget to set the correct headers [Content-Type and Accept headers should be application/json for all API calls]. Start by creating a user and then login.

Take note of the JWT token returned as shown in the screenshot below. Note that the token is only valid for one day after generation. For further API calls on the order microservice you will need to generate another token.

Create products using the API. When you list the products, take note of one product ID that you can use to create an order.

To interact with the orders microcervice, you will need to use the JWT token returned when you authenticate to the users microservice as shown in the screenshot below.

How To Convert A Monolith to Microservice

Here are some tips you should follow to ensure a successful transition from a monolith to a mmicroservice architecture.